18 years of marriage might not seem like a lot compared to other wedding anniversaries, but it’s a feat in itself. Outside of marriage, 18 years is incredibly significant, as it symbolizes the coming of age, and it’s when you become an adult in official and legal terms. That is why an 18th year wedding anniversary can metaphorically symbolize a deeper maturity in the relationship, and the coming of age of a love that has overcome many stages, becoming fully solidified.

After 18 years of marriage, one can pretty much assume that the love runs deep and that the bond between the couple is strong and enduring. The symbolic coming of age within the marriage represents the shift into new hopes and fortunes to come, as the love has endured the childhood of the marriage and now turns towards a more mature development. 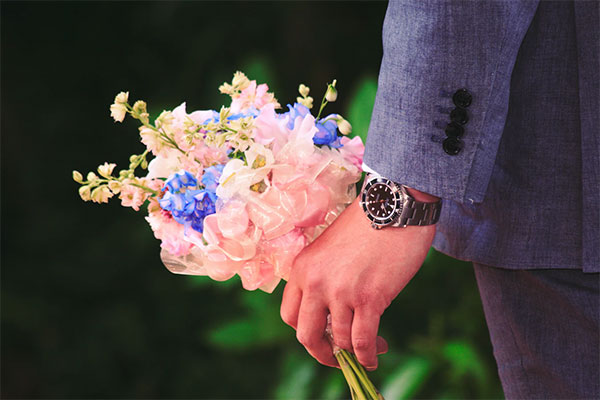 Custom Engraved Wooden Watch For Him

This wooden watch can be custom engraved to showcase a message or name of your choosing, and it’s the perfect way to symbolize the time you’ve already spent together, and the time still to come.

If you’re looking for an elegant and classy way of symbolizing the coming of age of your life, what better way than to gift a classy whiskey set? You can then toast to your marriage together, and look towards all the things yet to come!

This is a unique and special way to deliver a message of love, to make your anniversary a memorable and significant occasion. You could even gift the bottle and have it sealed until a future date so that the message is read in the future as a symbol of hope!

The 18th wedding anniversary is all about rekindling romance and passion, so these metal date night dice are perfect for coming up with new date night ideas that are left up to fate!

18th Anniversary You Are My Rock Gift

Marriage is all about being there for each other, to create a long-lasting bond with enduring strong love. After 18 years of marriage, a rock-themed gift can signify that very same thing!

Garnet is the gemstone used to represent the 18th wedding anniversary, so what better gift than a pair of beautiful garnet earrings? Jewelry has always been a traditional anniversary gift, making it very fitting

Red Garnet Bracelet Jewelry for Her

Another piece of jewelry you could gift her is this red garnet bracelet, elegant and beautiful with the garnets to symbolize the 18 years of marriage.

Gold ‘I Love You’ Necklace Inscribed in 120 Languages

Love has no boundaries and is a universal language, so why not express your love in as many ways as possible with this ‘I love you’ necklace inscribed in 120 languages?

Porcelain is often used to represent the 18th wedding anniversary, and this ceramic rose jewelry box is perfect to symbolize a deep love that is treasured.

Deep red flowers are the best for an 18th wedding anniversary, as it is all about rekindling the romance and deepening the love. That is why this metal rose is perfect to represent the everlasting love within the marriage.

It can be hard to choose an anniversary gift for a couple you know. This cheese board charcuterie complete with bowls and a knife set is perfect for providing them with an easy fancy date to celebrate with.

A personalized clock for their wall will not only look beautiful and mark the special occasion, but it will also symbolize the passing of time and how their love grows stronger with each passing year!

‘Our Love was Meant to Be’ Porcelain Figurine

Porcelain is the most appropriate way to symbolize an 18th year wedding anniversary, so this porcelain figurine depicting that the couple’s love was meant to be, is ideal.

Gifting porcelain to the couple will show that you’re well versed in the significance of the 18th anniversary, and the ornament will be a beautiful addition to their home with which to remember the special occasion.

The 18th anniversary is all about solidifying the marriage and looking towards new dreams and hopes. That is why a push pin world map is the perfect gift, as a way to encourage those travels they’ve been putting off!

Choosing a wedding anniversary gift is always hard, as you want it to be as special and as meaningful as possible. When it’s not a traditionally important milestone, it can be even harder. What gift is appropriate for 18 years of marriage? Let’s have a look at what is traditional in different parts of the world!