The 40th anniversary is a significant one and is often referred to as the ruby wedding anniversary.

This is because ruby is considered the symbolic and traditional gift of the 40th year of marriage.

The 40th wedding anniversary has always been associated with the ruby, as the stone’s deep red hue represents the enduring and undying love of a 40-year marriage.

As you can see from the above chart, the ruby is the gift of choice in most countries, although this can be interpreted in different ways, and doesn’t necessarily have to be literal ruby jewelry - it could be anything in the color red, or if you're not a fan of tradition, you're not obliged to stick to red gifts only.

The flower associated with the 40th wedding anniversary is the nasturtium, which symbolizes patriotism, conquest, victory, and impetuous love – supposedly representing all the characteristics required for 40 years of marriage.

The gladioli flower is also associated with the 40th anniversary. This flower is seen as a symbol of the strength of character and of attracting love. Both of these flowers bloom in a range of colors, and the vibrancy of the colors is perfect for representing the vividity of four decades of love. 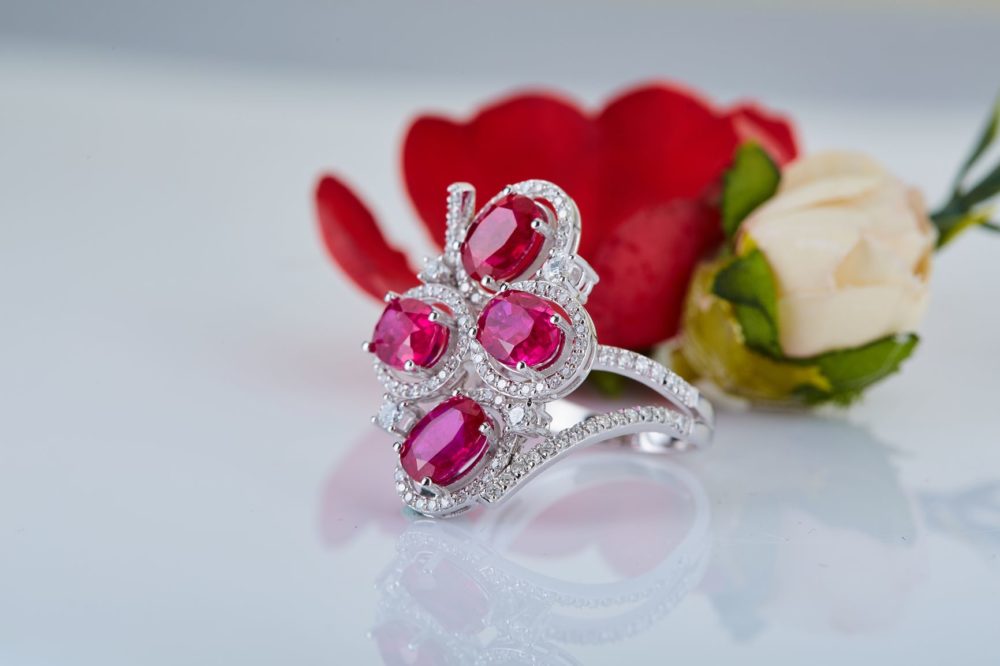 You can even add vases of gladioli and nasturtiums - the special flower of the 40th anniversary.

If you’re gifting your loved one flowers, why not sprinkle them in red glitter to mark the special ruby-themed occasion?

Why not give your other half a red rose for every year you’ve been together? You can either scatter them around your home or perhaps have them delivered to the house in a huge bundle. Red is the perfect color to symbolize your ruby anniversary, and roses are the symbol of eternal love.

While there are many luxurious locations to choose from for your 40th anniversary, a unique option would be to fly to the world’s ruby capital - Myanmar - where 90% of the world’s rubies are mined.

Alternatively, you could opt for Sri Lanka, which is also known as “gem island.” The rubies here are notable for their lighter color, so you could even select the perfect ruby gifts from the island.

Haven’t got the budget to fly to the other side of the world? Homemade gifts are still an expressive way of showing your other half how much you love them.

For your ruby anniversary, why not bake a red velvet cake? The ruby-colored interior is a perfect way of symbolizing the special anniversary, and you could even decorate it with iced red roses. Not much of a baker? Why not order a custom-made cake from your local bakery instead?

This beautifully crafted sundial is made from 99% recycled materials and is completely plastic-free.

The polished brass detail and bold red background have a unique antique charm, and it’s inscribed with “Happy Anniversary" "40 Wonderful Years Together 1981-2021" and "Ruby Wedding Anniversary.”

It’s also fully lacquered to ensure it stands the test of time.

This thoughtful set consists of 2x Large Crystal-Cut Glasses, 8x Stainless Steel (Ace Of Hearts) Stones, A Velvet Bag, Vintage Slate Coasters with (Life is Better With You), and a pair of stainless steel tongs.

Your husband will no longer have to worry about melting ice cubes thanks to these convenient stainless steel alternatives, while the tasteful whisky glasses have been crafted with a hand-blown etched crystal design for a timeless, classic look.

The set comes in an artisan box with a beautiful message that is bound to warm even the coolest of hearts.

Looking for something functional but thoughtful?

These bamboo coasters are made from top-quality natural solid wood and can be customized with your wedding date and names for a special, personalized touch.

They also come in a convenient wooden holder.

What better to give your husband for their ruby anniversary than a ruby itself?

This eye-catching ruby is 1.71 carats and is set in a chunky 925-marked sterling silver ring. It comes with a Gem Stone King certificate of authenticity and a lifetime warranty, too.

If you’re not too much about materialistic gifts, why not put together an album containing photos of your wedding day up until now?

You can put them in this sweet red photo album which even has space inside for you to write all the details of your special day.

Being the ruby anniversary, it’s no surprise that these stunning ruby lever back earrings are top of our list of gifts for her.

These 10k yellow gold earrings have a subtle elegance perfect for both special occasions and everyday wear.

Seen as the rose is a symbol of eternal love, why not give her one that never dies? This preserved rose is a 100% fresh flower processed through a unique preservation method to make it last forever.

It also comes with a matching rose brooch, so you get to give two gifts in one.

I Still Do Ceramic Jewelry Dish

Not all anniversary gifts have to cost the earth. This simple yet elegant dish reads “I still do”, and is perfect for her to store her jewelry in.

Made from ceramic, it measures 4" x 4" and is adorned with a golden glaze trim. It’s the perfect addition to her vanity table or nightstand, and the message is sure to make her heart melt.

This dual photo frame is adorned with ruby-colored details and is finished in matte and shiny silver.

It’s perfect for framing a photograph of your wedding day and adding another photo from your ruby anniversary.

Flowers are always a beautiful gift to receive, however, the drawback is that they never last long. Well, these premium roses last a year thanks to special preservation methods.

These are more expensive than your average bunch of flowers, but you also get the best of both worlds: the tender, natural look of real roses, combined with the convenience of absolutely no maintenance.

These ruby red roses come gifted in a sophisticated white box to add to the luxurious feel of this gift.

It’s personalized with the couple’s names and wedding date, along with a thoughtful inscription: "Thank you for setting a wonderful example of how beautiful love can be."

This intricate print will look striking framed in any hallway or living room and will serve as a continual reminder of their love.

It’s the perfect keepsake to commemorate the 40th anniversary and will look perfect placed on any mantelpiece.

If you’re looking for something a little different, this world travel map is personalized with the names of the couple and their anniversary date and comes with a box of 100 push pins so the couple can mark out all their adventures together.

It’s available unframed or framed in your choice of four recycled wood frames, and is offered in three standard sizes.

This glass vase looks like a giant ruby thanks to its red coloring and geometric style. It’s handcrafted from heavy, crystal clear glass and is perfect for hosting a bunch of flowers or looks elegant with a candle inside, too.

It’s also extremely affordable but looks far more expensive than it is, which is always a bonus if you’re on a budget.

Traditional Gifts Around the World